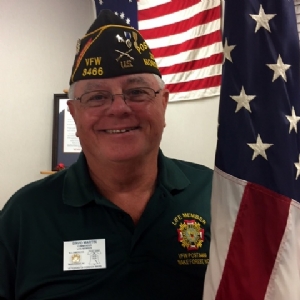 After graduation I joined the US Army with Basic at Ft. Bragg, NC, AIT at Ft. Sam Houston, TX (Combat Medic) and OCS at Ft. Benning, GA graduating as a 2nd Lt. Infantry on September 7, 1967.  I was then assigned to a Basic Training Co. as Training Officer.

In September 1968 I was sent to Vietnam and served with 1-22-4th ID as a Platoon Leader and was promoted to 1st Lt. I was only is country for approximately one month before being wounded and sent home.  Once home I went to Ft. Bragg as a Basic Training Company Commander. I was discharged from active duty September 6, 1969.

Having a six year Reserve Office commitment I was then assigned to the 80th Division Training Division (Richmond, VA) as a range office. Later I was promoted to Captain and assigned as Headquarters Company Commander. After completing my commitment I left reserve duty.

Upon leaving active duty I returned to Virginia and married my high school sweetheart. As of October 4 we will be married 47 years.

I went to work in the Commercial, Industrial, and Marine Insulation business as a management trainee and over the next 42 years working in Richmond, VA, Greensboro, NC. and again Richmond worked in Warehousing, Purchasing, and Sales to reach a position of Regional Manager.

While in Richmond the last time I was a member of Grace Covenant Presbyterian Church were I served as a Deacon and later as an Elder.

My wife and I moved to Durham in September 2011 after my retirement to be close to our daughter, her husband and our two grandsons.